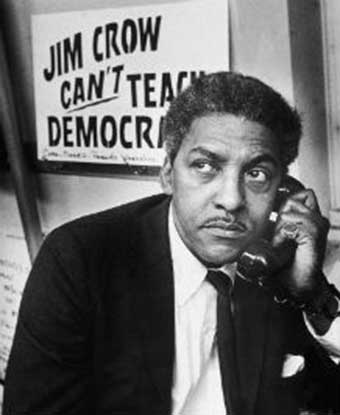 At OUTMemphis, we are celebrating Black History Month with a focus on African American LGBTQ community leaders. We kicked off the month by honoring local LGBTQ heroes and sheroes of color on our facebook page, and every week we will be highlighting an African American community member whose work has impacted the lives of same-gender loving and transgender communities of color nationwide.

Bayard Rustin (1912-1987) was a pivotal leader in the Civil Rights Movement, playing key roles in the planning and implementation of several key events including the March on Washington for Jobs and Freedom (1963) and the Journey of Reconciliation in 1947 (known as the first of the Freedom Rides). Rustin was the logistical genius behind civil rights events large and small all over America. He also played a key role in helping to found and/or support a variety of Civil Rights Movement organizations, including the Southern Christian Leadership Conference, the Congress of Racial Equality (where he was nicknamed CORE’s “uncle”), and the A. Philip Randolph Institute. While Rustin lived as an out gay man, often his identity lead to him doing behind-the-scenes work within the Civil Rights Movement. In his later years, Rustin championed human rights, the right to free elections, and gay rights.

“We need in every bay and community a group of angelic troublemakers.” – Bayard Rustin