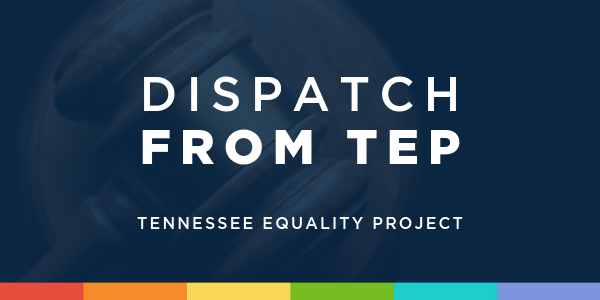 Our community partners at Tennessee Equality Project are working hard to ensure that LGBTQ rights are preserved and expanded. While TEP has their finger on the pulse of the national stage, they focus their efforts on the state and local politics of Tennessee.

In October, the Supreme Court of the United States of America will convene to hear a number of cases regarding LGBTQ rights and equality. While these cases are different in scope, the thing they have in common is that they involve the equitable inclusion of justice for people who fall outside of the cisgender or heterosexual system.

While Title VII of the Civil Rights Act of 1964 explicitly covers bias or discrimination on the basis of sex, it is unclear whether or not (from a legal stance) this covers sexual orientation or gender identity.

“In October the Supreme Court will take up […] cases to determine whether sex discrimination in existing civil rights laws covers employment discrimination based on sexual orientation and gender identity. In other words, this is the question of whether LGBTQ people are already protected. More than 200 companies have signed onto an amicus brief supporting the inclusion of LGBTQ people. Many elected officials including Congressman Steve Cohen of Memphis have signed similar briefs. Observers are concerned that, as the Court leans increasingly conservative, the eventual ruling could be a major setback. The federal Equality Act, which recently passed the House of Representatives, would protect LGBTQ people in employment, housing, public accommodations, credit, education, federally funded programs, and jury service. It is important to continue to advocating for passage in the Senate regardless of the outcome of the two cases headed to the Supreme Court.”

For more information on the companies that signed this initiative, check out this article from USA Today.

For more information on Tennessee Equality Project, visit their website.