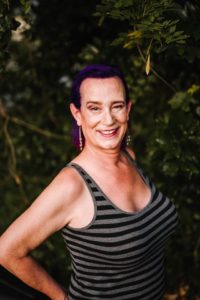 Today we mourn the passing of comedian and performer Lisa Michaels, a longtime friend and supporter of OUTMemphis. Beginning her journey with us a volunteer, Lisa eventually brought her queer comedy showcase, OUTLoud, to the community center. She brought queer comics from across the region to connect with our audiences, for free. OUTLoud shows were always standing room only.

Her love for comedy, music, and bringing people together was as big as she was tall. Often referring to herself as the “purple-haired Tramazon,” she will not easily be forgotten. Lisa was a great friend to many and was unapologetically herself anywhere she went. She was proud to be a part of the Memphis LGBTQ+ community and we will cherish the laughter and friendship she brought to our city.

Her dedication showed through her work, including many partnerships with community organizations and nonprofits across Memphis. She raised money and awareness through her performances, including continued support for OUTMemphis and our services. She was honored with OUTMemphis’s “Volunteer of the Year” in 2016.

Lisa Michael’s passing is an incalculable loss for the city of Memphis and our trans and queer communities. As is the case for all who do authentic community work, Lisa was larger than life, extending her generosity to every person she met and organization she supported. To be not just “out,” but an omnipresent public figure as a trans woman in Memphis requires courage, real risk, and profound self-love. Lisa was a trailblazer in the truest definition.

That comedy and music were her chosen artforms is a radical act in itself: trans people in public life are so often associated with harm and tragedy. Lisa’s brand of activism taught us that trans joy matters. Lisa began performing in Memphis around 2013, unafraid to step into the light when so many individuals still risk their safety to do so. Lisa’s enormous presence has permanently made room for the trans Memphians, performers, and activists who will follow in her legacy.” – Molly Rose Quinn, Executive Director