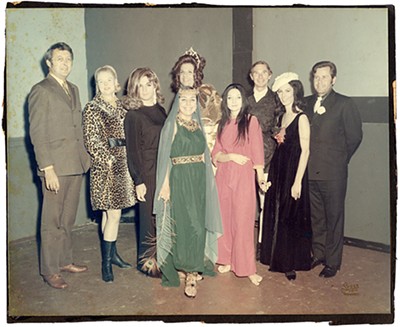 This October 31 will mark the 50th anniversary of a (then) controversial public drag show, the first in Memphis. This Thursday, Memphis will be signifying this in commemoration by placing a historical land marker at the Evergreen Theatre where the original event took place.

Vincent Astor, local LGBTQ+ Historian, has spearheaded this initiative, and has released the following press statement:

October 31 will mark the 50th anniversary of “The 1969 Miss Memphis Review.” A historic marker at the Evergreen Theatre (known in 1969 as the Guild Art Theater) commemorating the show will be unveiled at 6 p.m. This is the second gay-related marker in Tennessee and the first in Shelby County.

The original 1969 show, later renamed the Miss Gay Memphis Pageant, happened on Halloween because it was the only day of the year that it was legal for men in Memphis to do drag openly due to a city ordinance.

The 1969 theatre manager, Bill Kendall, also appears on the marker. Kendall is an OUTFlix honoree for his contributions to local cinema. Artifacts and photographs from the era will be displayed.

The review marked a crucial moment in Memphis. It was a local victory for the gay community and came just four months after the Stonewall Riots in New York City where thousands of protestors pushed back against police aggressions against the gay community there.

Sponsored by Mark Jones, Vincent Astor, the Board of Theatreworks and the Shelby County Historical Commission. Members of both the Theatreworks board and the Shelby County Historical Commission will be present for the unveiling plus some special guests. The public is invited. Costumes are welcome, drag is not mandatory but encouraged, bad drag will be tolerated.

A reception will follow at the Doghouzz located at 1349 Autumn (across from Crosstown Concourse) beginning around 7pm. A tribute show will begin at Dru’s at 1474 Madison at McNeil starting at 8:30.