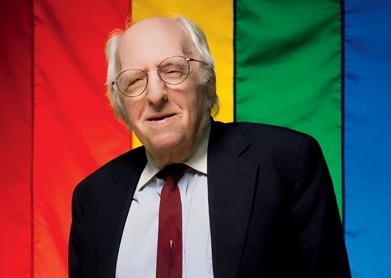 Frank Kameny is known for being one of the most significant figures in the United States Gay Rights movement. After being drafted and serving in the Army, Kameny got a bachelor’s in physics, a master’s and doctorate in astronomy, and started teaching at Georgetown. He was hired by the United States Army Map Service. However, he was fired and banned from future employment by the federal government because of his sexual orientation and a past fraudulent criminal charge.

Kameny’s unfair loss of employment radicalized him, and the result was a lifetime of gay rights activism. First, he appealed his wrongful termination case in the courts, becoming the first person to file a civil rights lawsuit where sexual orientation was the reason for the civil rights violation. The result was his disbarment from any and all federal service, and he never held a paying job again. He was supported by his friends and family for the rest of his life, which he spent fighting for fellow gay men in military service and gay and lesbian people as a group. He was the co-founder of the Mattachine Society, which is credited as the first gay rights organization in the U.S. The Mattachine Society partnered with the Daughters of Bilitis, the first lesbian rights organization in the country, to start the first public protests for gay and lesbian rights in New York City. These protests became known as the Annual Reminder for Gay Rights, a precursor to Pride as we know it.

Kameny passed away at 86 years old, and in that time got “homosexuality” removed from the Diagnostic and Statistical Manual (where it was listed as a mental health issue) and pushed tirelessly to end the dismissal of gays and lesbians from military and government service.