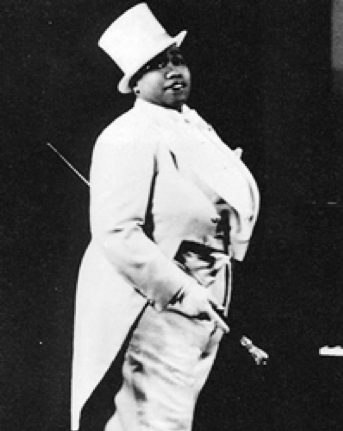 Gladys Bentley was born August 12, 1907. She grew up feeling born different because she preferred to wear her brother’s clothes. In elementary school, she recalled having a crush on one of her female teachers. Her family made her feel rejected because of her she did not conform to gender norms. This caused her to run away from home at the age of sixteen to start a life in Harlem.

Once she got to Harlem, she began performing at Harry Hansberry’s Clam house in men’s wear. There she became known as Barbara “Bobbie” Minton. She was known for openly singing about her relationships with female lovers and flirting with the women in the audience. Her performances appealed to so many different audiences. She was stated by Langston Hughes to be “a perfect piece of African Sculpture, animated by her own rhythm”.