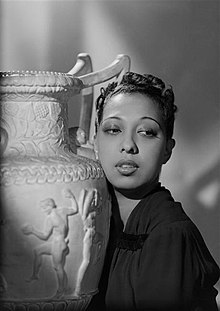 Josephine Baker was an openly bisexual singer, actor, and performer who fought for equity for queer people, women, and people of color throughout her life. Baker was born in the United States of America and naturalized as a French citizen later in life after marrying a French man. Josephine Baker was one of the mot successful African-American performers on the stages of France (including singing, acting, vaudeville, burlesque, and much more). This was a platform that Baker utilized to the benefit of the Civil Rights movement. Baker heavily denounced segregation and refused to perform at segregated venues. She worked to advance the cause of Civil Rights, speaking at the 1963 March on Washington, and was even offered a leadership role within the movement by Coretta Scott King after her husband Dr. Martin Luther King Jr. was assassinated. Baker adopted 12 children of different ethnicities and raised them together in one home. She referred to them as “The Rainbow Tribe”, and saw them as a model for racial diversity that the world at large should follow.

For more information on Josephine Baker, check out these links:

For past LGBTQ leaders that have been spotlighted, check out these links: